My Travel Diaries: Days 1 and 2 in Paris

Hello! I decided that I would like to share my travels with you as they are happening, and then when I am back home I will write more extensively on the destinations, things to do, packing tips, ect. I hope you enjoy my travels as much as I have so far!

My flight to Paris was with AirFrance, and I was very impressed with the airline! Everyone was so professional, the food was good, and the plane had a lot of room to walk around in. Once I landed and got through immigration and customs, it was time for my adventure to start, and for that to happen I had to figure out the Paris Metro system. I started with getting a 2 day pass that would allow me on any of the trains within Paris, but then I had to find my train. The metro system really isn’t hard to navigate, as long as you know what stop you need, which was the problem I kept running into. I had no idea what stop I needed for certain attractions, but I finally got to where I needed for my Airbnb. Lucky for me my Airbnb was located within steps of the metro! It was perfect. Once I got settled in I took a shower and was ready to see what Paris had to offer. 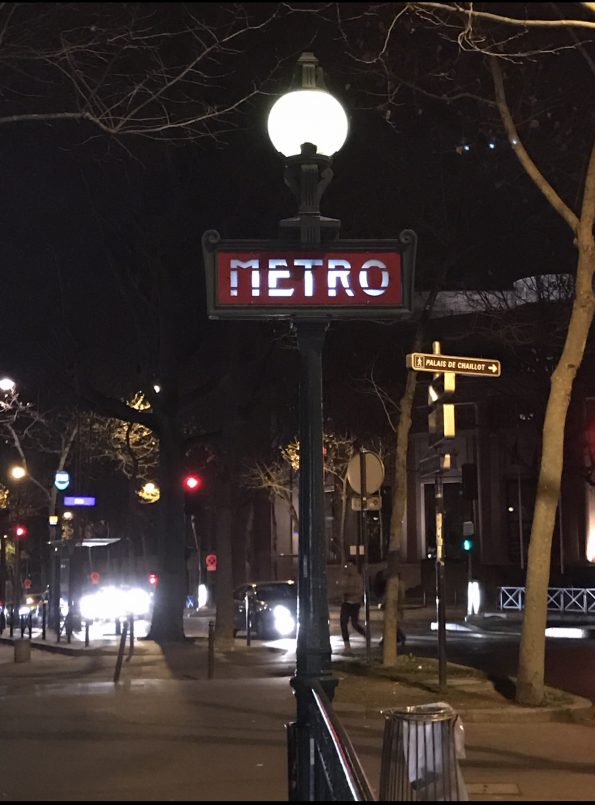 The first thing on my list was to go see The Eiffel Tower. I hadn’t really thought about if I wanted to go up during the night or the day, but by the time I had settled in it was already dark. I also knew it would be pretty busy, but I ended up waiting for 2 hours just to buy my ticket, and then another 30 minutes until I got up to the second floor. The views were gorgeous, but I was disappointed with the shops and restaurants they had to offer. I also wanted to go skating, but unfortunately the rink was closed for maintenance. I was going to take the stairs down, but it was so cold that I decided to just wait in line to use the elevator. Once I got down I was pretty tired so I headed back to eat and call it a night because I had a lot planned for day #2! 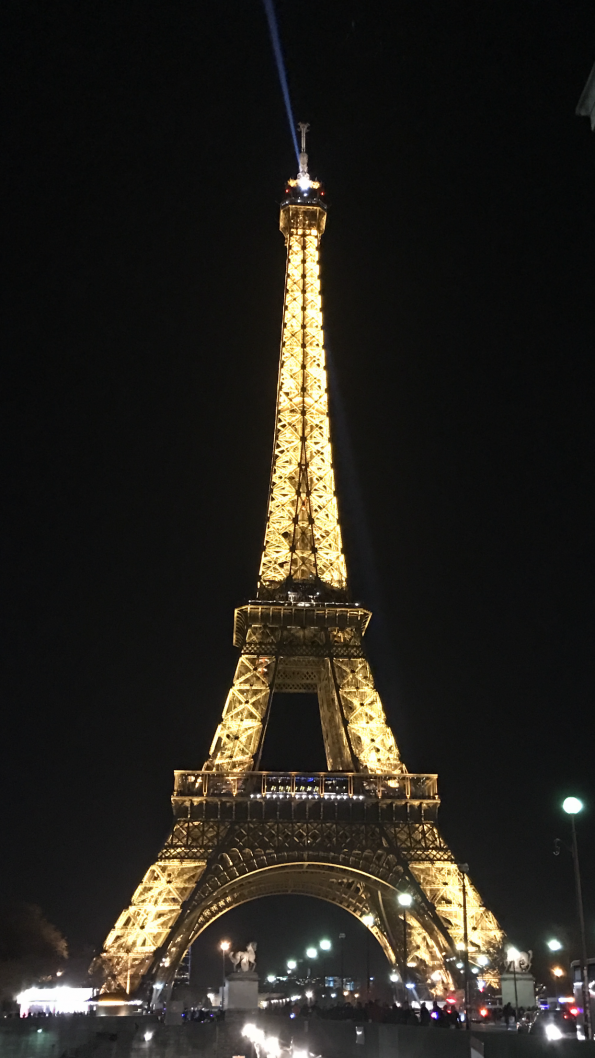 I woke up at 6am, and left my place around 7:15 for The Notre Dame. I had tickets to see The Catacombs at 10am, but I wanted to get something in before then. By the time I arrived at The Notre Dame, the sun hadn’t even come up yet, but it was open. There was hardly anyone around because it was early which was perfect for getting some pictures. I walked into the cathedral which was free of charge, and it was stunning. There was a service going on as well, and it was really nice to be able to be there even though I had no idea what was being said. I also walked along the entire outside. I was all alone, and when I got to one side all I could see were 4 men with huge guns in their hands. Naturally I freaked out a little bit and started walking quickly the other way. I looked back just as they were walking under a street light (it was still dark out) and noticed it was the military or the police and they were just there to walk around and protect the cathedral. Then I continued, and searched for the entrance to see the gargoyles that are near the top. I discovered they didn’t open until 10am which I was bummed about because I really wanted to see them and have a Hunchback of Notre Dame moment. 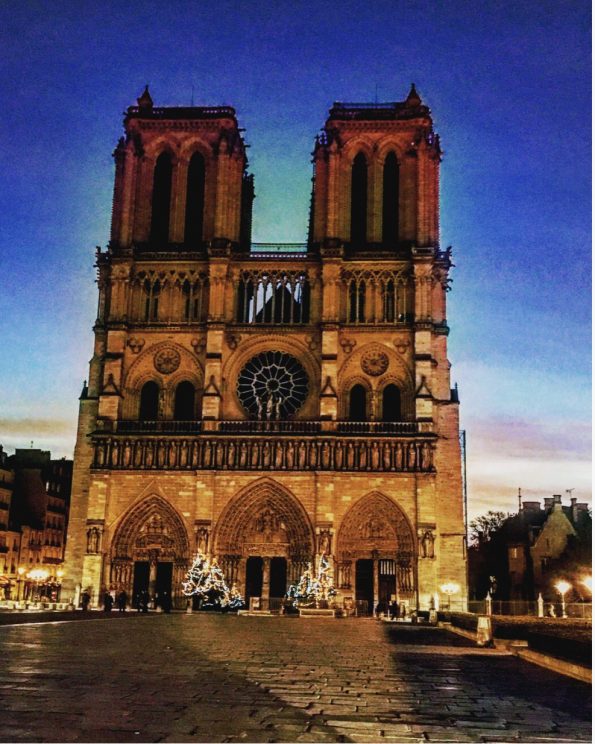 After I left the Notre Dame I headed toward the Catacombs. They don’t open until 10am, but when I got there around 8:30 there was already a long line for people who didn’t have a ticket. Luckily I did, so I went and found a pastry shop and enjoyed my first pastry of Paris, a delicious chocolate croissant. By the time I finished it was around 10 and I lined up for The Catacombs. I will go into more detail in a separate post dedicated to just The Catacombs, but let me just say they were insane. When I got there and saw the line I thought maybe it was a tourist trap type of thing, but it wasn’t at all; I couldn’t believe how amazingly powerful it was to be there. 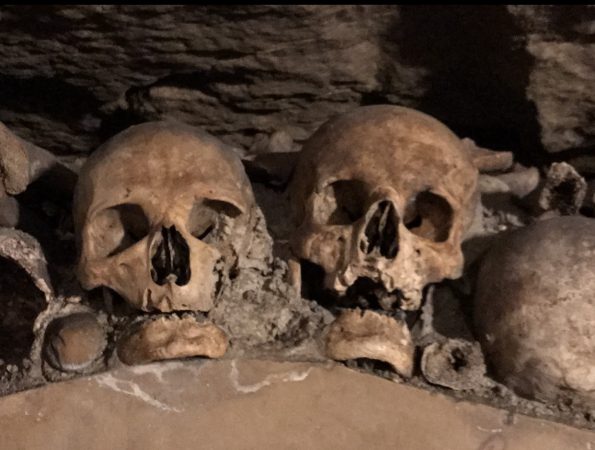 The Catacombs took about 1.5 hours and I decided to go to a cafe that had wifi, eat some lunch and figure out where I wanted to go next. The cafe I went to, Indiana Cafe, was really great but I would of course find the one cafe in Paris that serves Mexican food. Oh well, it was really good. I decided on going to Montmarte – Sacre Coeur Basilica or Basilica of the Sacred heart. It sits atop a gigantic hill, but it’s worth the hike to get to the top. I didn’t go inside because there were so many people, and when I got to the top I noticed there was a cable car to take to the top instead of the hill I climbed, then the 200+ stairs, and then even more stairs, so I did take that back down the hill because I was tired! 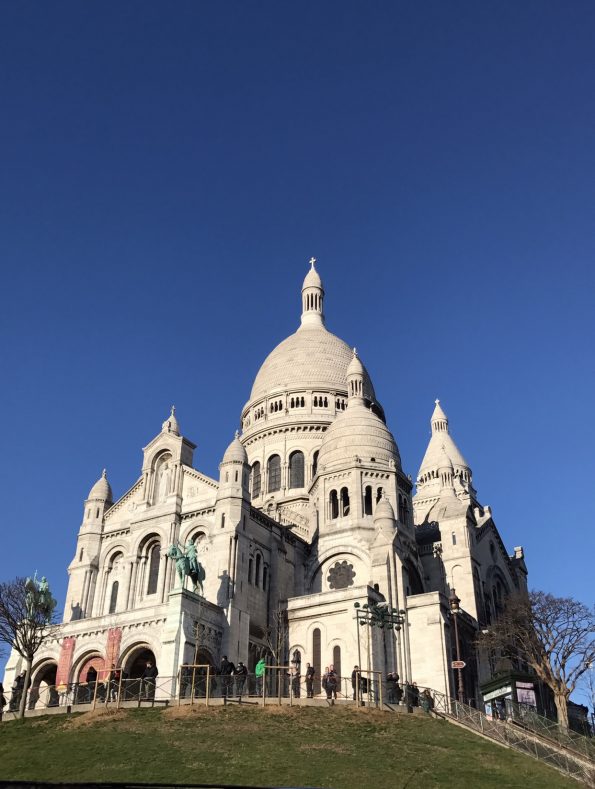 I then went to The Louvre. My original plan included going inside both The Louvre and Musee d’Orsay, but I didn’t go into either because the lines were 2-3 hours to get into each museum. I settled for just taking a picture of The Louvre pyramid to say I saw it, and I will have to go inside on another trip to Paris! After The Louvre, I went to see The Arc de Triomphe which was huge and pretty cool to see. I also ended up eating a Nutella-banana crepe from a street vendor that was amazing. The Arc de Triomphe is right next to Champs-Elysées which has a Laudree. Being in Paris I had to try some of their famous macaroons, and I ended up getting 12 mini macaroons and a raspberry cake that was gorgeous. I literally didn’t even know what it was but said “I’ll have one of those as well” because it was so pretty. €42 later, and I’m not complaining because it was delicious! 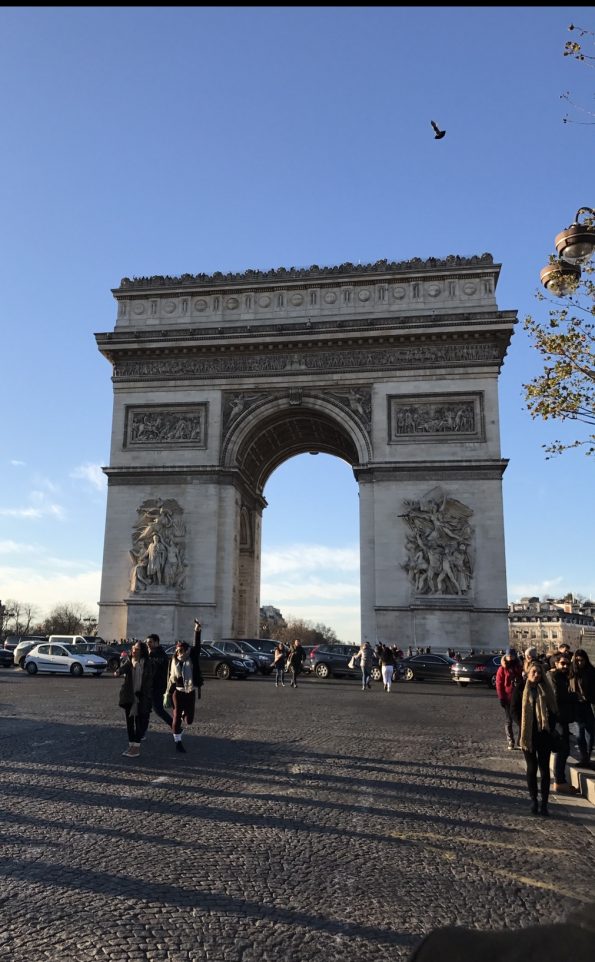 By the time I got out of there I had taken over 20,000 steps for the day and was pooped, so I headed back to my Airbnb, and was happy with what I was able to see! I am also going to Disney Paris tomorrow so I need to be well rested!