Ghosts, and goblins, and ghouls, oh my! This was what I was thinking as I was walking through The Pasadena Convention Center to attend Scare LA over the weekend of August 6th. Scare LA was like a world I had never been in before, it was filled with all things Halloween. People were dressed as characters I knew, as well as some I had never seen.  There were a lot of witches, and a lot of Elvira’s, and at least one Glinda in the crowd as well.  Everywhere you looked was Halloween, whether it was merchandise being sold, or a class being held. If you’re a Halloween lover, pay attention, because I’m going to tell you everything about Scare LA you would want to know!

I was able to get a discounted ticket through some friends of mine, but Scare LA does offer several different packages for either weekend or just day passes. If all you would like to do is attend to see vendors and not have any priority access or front row seats to classes, then the cost for Saturday is $35.00, Sunday is $30.00, or you can save $15.00 if you buy a weekend pass for $50.00. If you would like to have access to all classes and panels with priority seating, then expect to pay $400.00 for your ticket. For me, just seeing the vendors and walking around was enough, but if you are someone who wants to learn how to get into the business of haunt construction then paying a higher price for a ticket is something you should be prepared for.

There were over 200 vendors in the Pasadena Convention Center, which is why I think if you want to attend, you should plan on spending the weekend there. You would be able to view each vendor’s booth in just one day, but there is so much that in order to spend quality time looking at what they have to offer, a weekend pass is a must. There were vendors that sold clothing, Halloween decorations, and a lot of booths were there advertising for their haunts.

While I liked something about each one of the vendors, some vendors that really stood out to me were:

This vendor had theses amazing skirts that could be converted for wearing 4 different ways, and she also was able to cater to all sizes! The way the skirts are made, they can fit a little kitten, or a 5XL human, it really is amazing. The only downside to this vendor is, there are no orders that can be placed, she only sells what she has then and there, but she made up for that by being so friendly, and having fun sales throughout the event. Check out www.geishamoth.com  to see some of her items!

This is a candy shop in Los Angeles, CA where you can actually make your very own candy bars! I had never heard of them before, but I am so glad they were there because I will be stopping in to their store and making a bar of my own one day… possibly a Bri-bar, or even a Bon Voyage with Bri bar… see what I did there?! While they had a lot of different bars to choose from, the main products were the Elvira bars. There were 3 different Elvira bars to choose from, and I bought 2 of them, one with pumpkin seeds, sea salt and caramel, and another one which had coffee cream and espresso beans. I have only tried the pumpkin seed one, and oh my gosh was it good. Definitely worth it! You can go to www.sweetlosangeles.com  to see everything they have to offer!

This vendor is someone who I am glad I was able to find. She is a freelance artist, and her artwork is so fun! While it plays on the spooky side, there is something different about it that I can’t really explain. She also had some artwork of the infamous Sanderson sisters, which is really what drew my attention to her booth. While her artwork was amazing, and colorful, the coolest part of it all was she had pins and necklaces made out of it as well! They were so cute, and I am excited to see what happens with her business in the future! Check out her website www.artbyalexbunch.com and her Etsy shop, www.etsy.com/shop/createdbyalex  to see some of her product!

This vendor was selling awesome pumpkin purses, and I was lucky enough to snatch one up! I had heard of him before as my friend Desirae actually has a purse of her own from him. Basically he makes these purses shaped like pumpkins out of different materials and colors, all by hand. No two purses are ever the same, and he does not do any custom orders. I was at his booth for maybe 10 minutes trying to pick out a purse.  He had multiple people come up to ask about custom orders, but he is so popular that there is no way he could keep the quality with the amount of orders he would be doing. I am so happy I was able to buy a purse of my own, and I cannot wait to rock it! If you are interested in his product, follow him on Instagram @lovepainandstitches, and check out his Etsy shop, https://www.etsy.com/shop/lovepainandstitches.

Obviously at an event like this, the scarier you dress, the better! There were so many people dressed in costumes that would scare the daylights out of you if you were at a haunt event, and others dressed in normal clothing. The main thing I saw were people dressed as witches, after all, the theme of this year’s event was “The Season of the Witch”. I for one dressed as Glinda, the good witch, because I am more of a pink type of girl, but for the most part a lot of black was in the building.

There was a section for mini mazes set up in a room just outside of where the vendors were located. These are pretty much just little sneak peaks of mazes to come for the haunts that will be held in October. I went through some of them, and while I was happy with what they had to offer, I was surprised by how short they actually were. You were pretty much in and out in 30 seconds, which is fine, but I was just hoping for a little more to really get a taste for them.

The Decayed Brigade is a group of Sliders from Southern California who perform for various haunts. They were there performing multiple shows throughout the weekend, and even scaring people when not performing. I was able to catch a couple of their shows on Saturday, and I was even lucky enough to watch them break a record of jumping over 11 people at one time! It was insane how they can get a crowd going! If you ever have the chance to go to The Queen Mary, Knott’s Berry Farm, or Universal Studios for their Halloween events, you will be able to see them in action!

The website for The Decayed Brigade is, http://decayedbrigade.bigcartel.com/, make sure to check it out for some of the gear they offer! 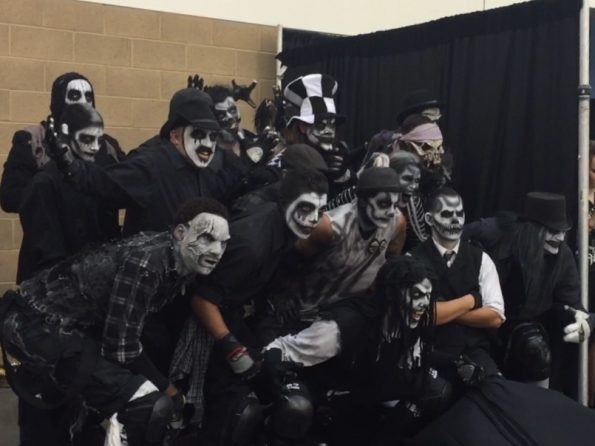 Scare LA had a lot to offer that I didn’t have enough time to participate in. There are classes throughout the entire weekend, ranging from learning how to become a monster, to learning how to create your own out of foam. Scare LA also had screenings for scary films that range from family friendly to adult only. There were also different panels you could attend to learn more about anything Halloween! I didn’t attend any of these, so I can’t tell you much about them, but from what I heard, they were great.  You just want to be in line early if there is a panel or sign up early for a class to make sure you get into it!

Overall, I am so happy I was able to attend Scare LA this year, and will definitely be attending again in the future. If you are thinking of attending, make sure to keep an eye out for discounted tickets, mine was only $25.00 for the whole weekend, which is 50% off! If you had any fun experiences with Scare LA or a different Halloween convention, let me know in the comments below.  I would love to hear about them!