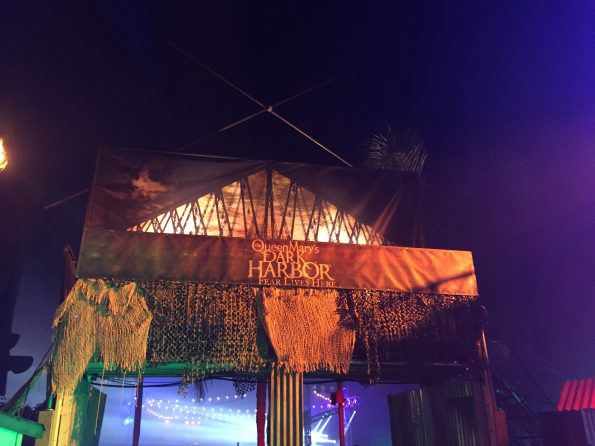 If you are in Southern California during October, The Queen Mary’s Dark Harbor is a must do. I have attended this haunt event in the past, and it has always been at the top of my list, but this year I was lucky enough to be able to attend the media preview for Dark Harbor on September 29th.

Attending the media preview gave me a different perspective on Dark Harbor. I was able to walk through the mazes when there wasn’t a crowd and take everything in before it ever got busy. On the other hand, the mazes are extremely scary when you are the only one walking through them, so it was nice that I was also able to stay and play when the crowds arrived there as well. If you are thinking of attending Dark Harbor, here is everything you will want to know!

There are so many haunt events in Southern California that it can be hard to decide what to attend, but Dark Harbor has something that nobody else has – an amazing location. Dark Harbor actually takes place on and around The Queen Mary, a 1930’s ocean liner that is believed to truly be haunted in Long Beach, CA. This location gives a little more to the “haunt” that none of the other big events have going for them!

Dark Harbor has six mazes for you to enjoy; Intrepid, Circus, Deadrise, Lullaby, Soulmate, and B340. All of the mazes have so much detail put into them and they are much longer than the other haunts I have attended in Southern California. I won’t go into too much detail about the mazes because I do not want to give anything away; however, I will give you some insight on each of them so you have something to look forward to!

This year, Dark Harbor brought out a brand new character, The Iron Master. While I didn’t encounter him just walking around the park, I did go through Intrepid, which is a maze dedicated to showing you how Ivan became the Iron Master to protect The Queen Mary for eternity. I liked this maze a lot because it really does bring you back in time with a feeling of being aboard a ghost train and then inside of a shipyard. This maze was in the dome, and not aboard The Queen Mary. 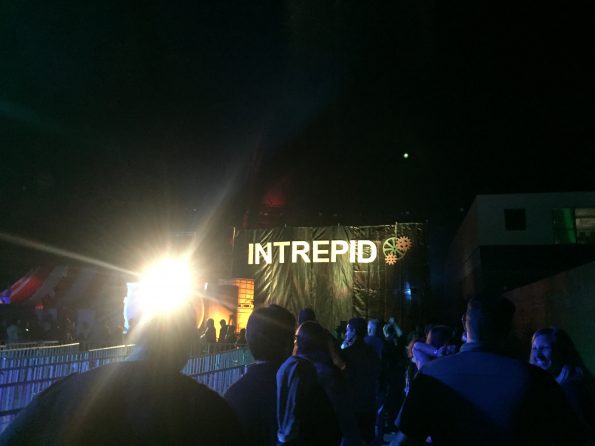 Circus is also inside the dome, but it is a very different feel than Intrepid. This maze is colorful, fun, full of clowns, and of course scary. While it isn’t the scariest, there are some moments where the actors really get you, and the end of the maze was my favorite part! You walk through a tunnel, and it totally throws off your equilibrium – so fun! 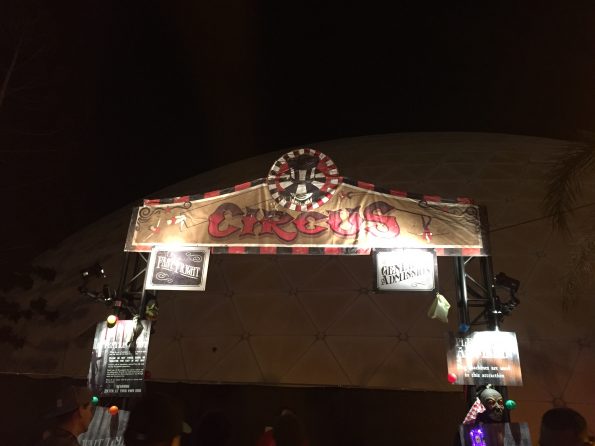 This maze has been at Dark Harbor before, and it is one of my favorites. The actors really get to you in this maze, and the detail that is put into it is absolutely incredible. Deadrise puts you in the middle of a shipwreck, which gives the scare actors lots of hiding places to pop out at you! Make sure you keep an eye out for sections that you’ll get wet in, because after all, you are inside of a shipwreck. 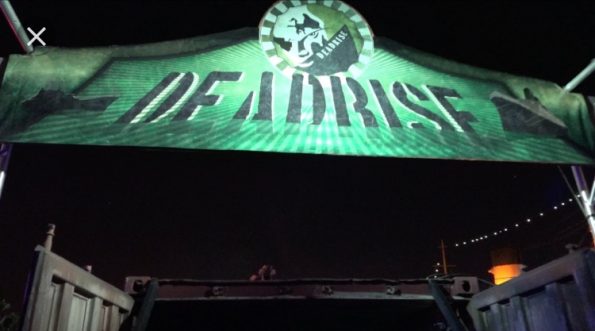 There is an infamous ghost story about a little girl who drowned in the abandoned pool that is on The Queen Mary and Lullaby is a new maze that brings this story to life with Scary Mary. While walking through the maze you will run into Scary Mary, and see some of her wonderful artwork. The maze also gives you the opportunity to walk through and see the abandoned pool that the story is set in. My only issue with this maze is (when I went through it there wasn’t a huge crowd), that everybody wanted pictures of the pool (myself included) which caused a delay in continuing the maze.  The delay brings you out of the scare zone a little. On the other hand, being able to incorporate the actual ship into the mazes is a reason that I think Dark Harbor is one of the best events. Overall this maze is super scary! 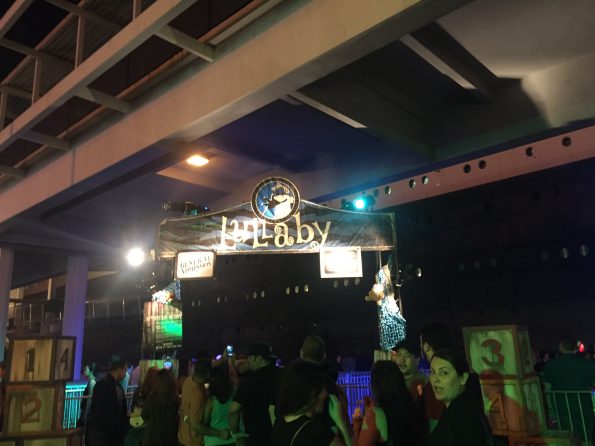 Soulmate was my favorite maze of the night! This might have been that it was only myself and one other person in the maze.  Also – we were the FIRST people to walk through it! That was so cool, but the actors were only focused on us, so it was sooooo scary! In this maze you meet Graceful Gale, and while she seems nice, as you go further into the maze you see how she lures potential suitors.  What happens next is for you to find out. Soulmate is one of the mazes that is onboard the ship. 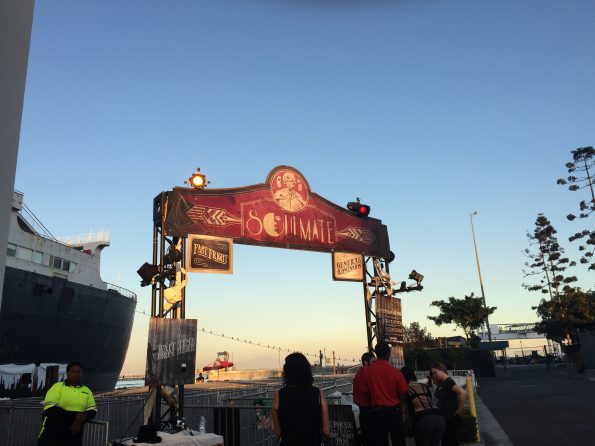 This maze is also onboard the ship, and it is another great one! You get to descend into the mind of Samuel the Savage, while at the same time seeing a lot of the innards of The Queen Mary. There is one point when you are walking over a long walkway, and you can look down into the ship below you – it is just an experience so different from anything else. B340 does have some tight spaces, but it just adds to everything else the maze has to offer. 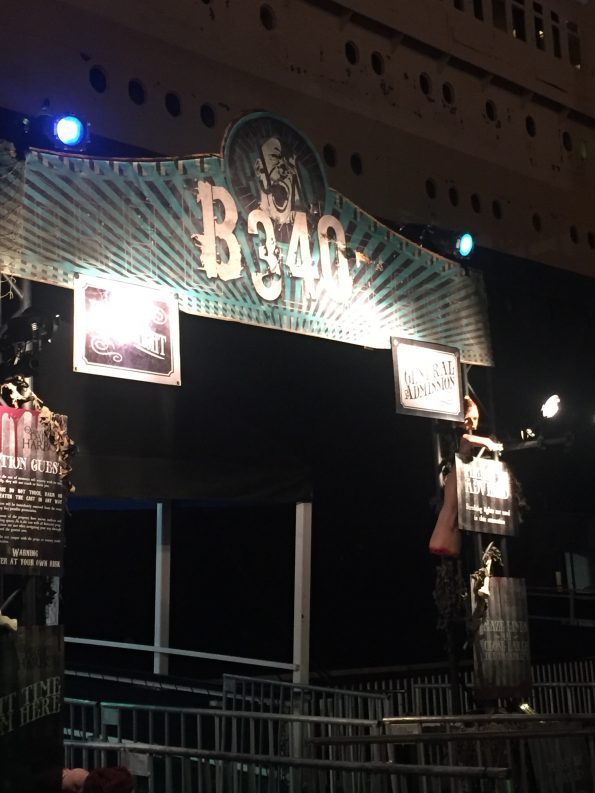 All of the mazes are must dos, and while Soulmate stuck out to me, every single maze has something that makes it special and unique. Another thing to keep in mind while walking through the mazes is there is no air conditioning, and the mazes can get hot, especially the ones onboard the ship, but it doesn’t take anything away from the mazes themselves.

The mazes are definitely the main event at Dark Harbor; however, there are other activities to do while visiting!

This is a scare zone where nobody is safe! While there are monsters walking throughout the entire Dark Harbor area, they seem to be even more concentrated in this area. The walkway will also bring you to the entrance of Deadrise, some really awesome artwork, and the Sideshow.

This is a walk through maze/sideshow. It isn’t a maze in the same sense as the others with people scaring you, but it does wind you around while looking at some fun sideshow oddities and acts. My favorite part of this was the interactive skeleton, Sparky! He was so funny! The cost to go through this is not included in your admission price, and is an additional $5.00. 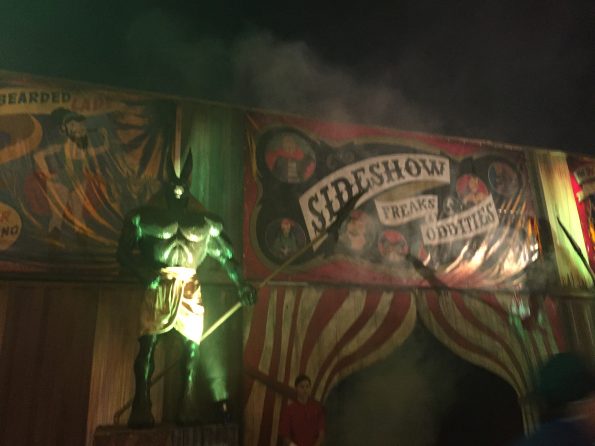 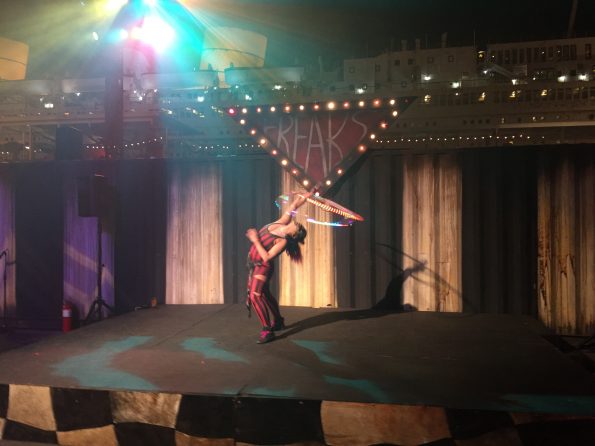 These swings are just like what you would find at a carnival attraction; if you enjoy rides it is nice to have this available to you! You also get a chance to have a birds-eye view of Dark Harbor. But watch out, as every now and then some of the characters will follow you onto the ride. The cost for this is also not included in admission, and is an additional $5.00. 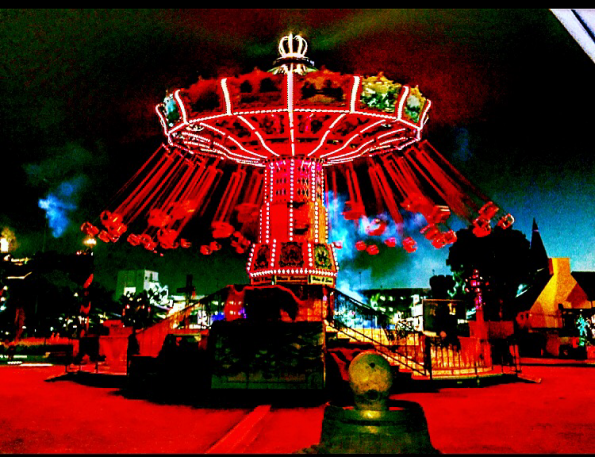 This is a fun movie experience when you need a break from walking around Dark Harbor. Don’t get me wrong, it is still a scary, and an adrenaline fueled 8 minute experience! Make sure to be prepared for getting a little wet in this show, after all, it is a 4-D experience! The cost to see this movie is $5.00, and is not included in admission.

This is a fun thing to do, and it is nice because you are not being shot at, instead you shoot at targets!  Again, this is not included in admission, and it is an additional $5.00.

$99.00/night and you have your very own private creepy cabana! They serve food and drinks, and you will have a view of the freak show from the comfort of your cabana. If you have a large group, this is a really fun thing to do, and you can even meet some of the characters when they come up to your cabana!

There are plenty of places to choose from if you are looking for something to eat or drink. When you first walk in, The Voodoo House is available to get an adult drink or two. Then as you walk throughout Dark Harbor, spooky themed food vendors are set up throughout – they have tacos, pizza, pasta, ice cream, and basically anything you could possibly want! Like any event, expect to pay high prices for food, tacos cost $13.00, and water was $3.00. I also had a margarita from the Big Top Bar, and it was $10.00. 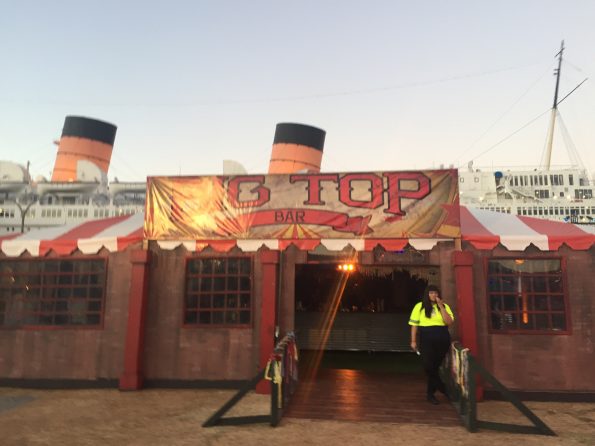 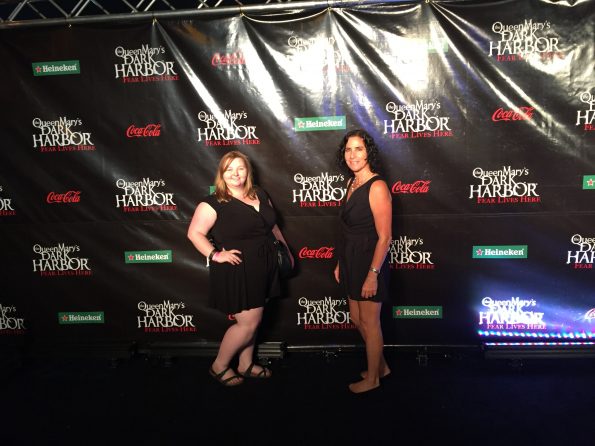 Overall, Queen Mary’s Dark Harbor is an absolute must do if you are looking to attend haunt events while in Southern California! I absolutely love the fact that it is located on an actual ship that is believed to actually be haunted. If you had any experiences with The Queen Mary or Dark Harbor, let me know in the comments below, and make sure to plan Dark Harbor into your October haunt schedule! 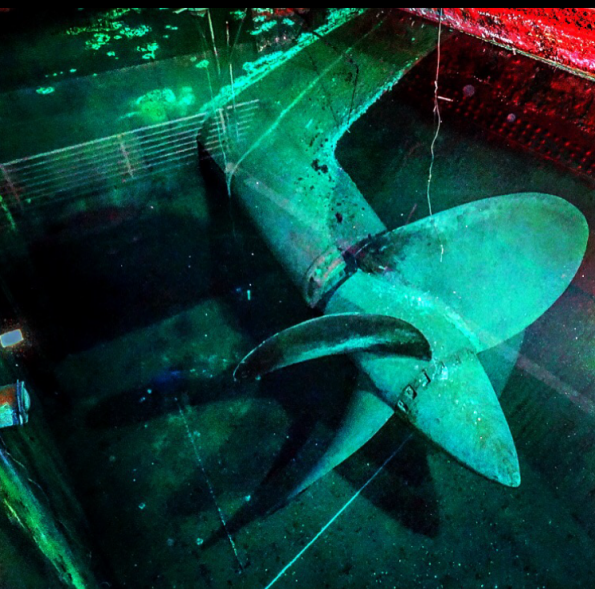 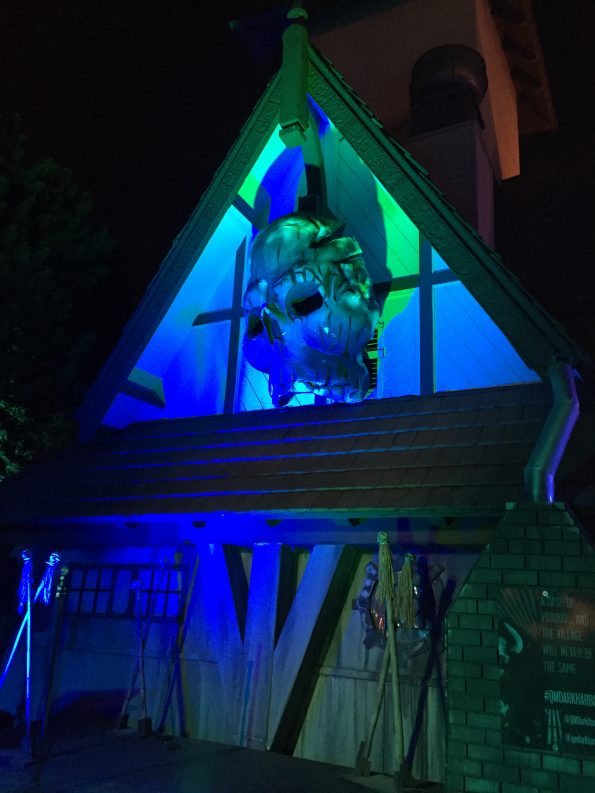 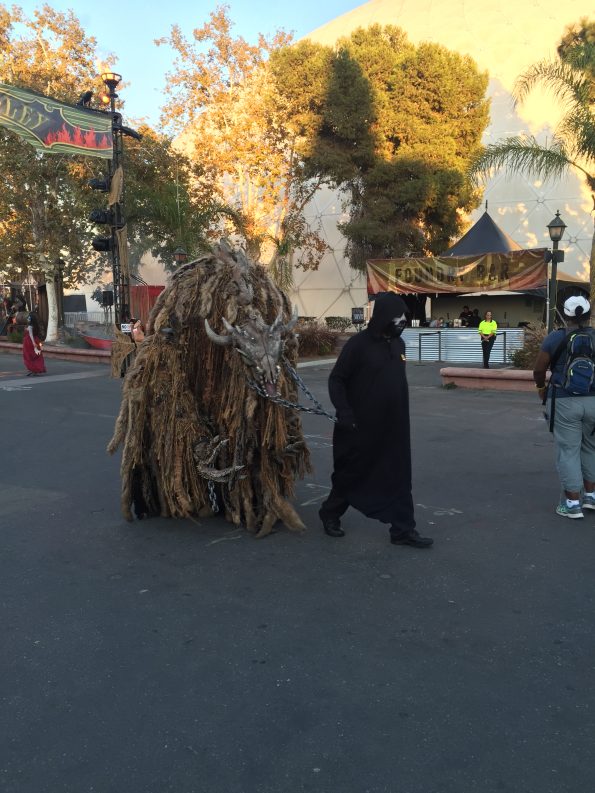 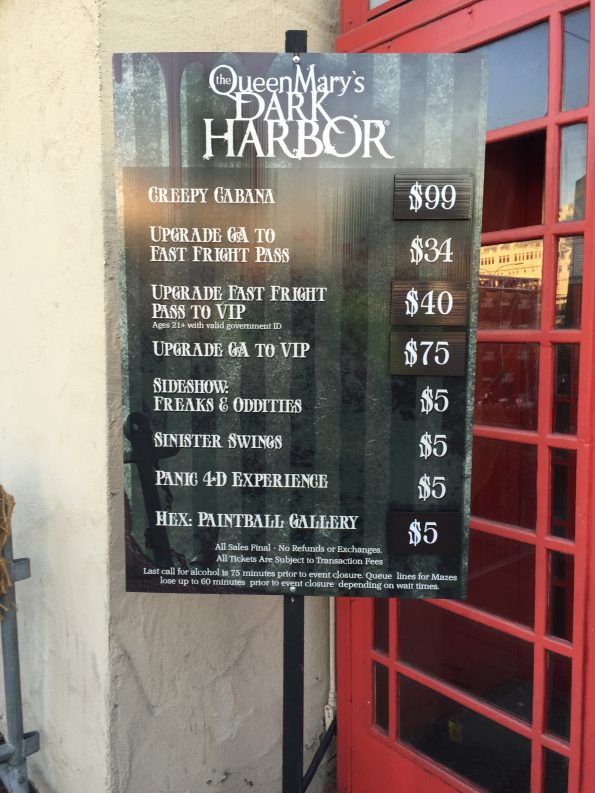