Old Tucson is the perfect place to go for a western experience, and it has a pretty impressive film history with over 300 movies and TV shows filmed on property! Old Tucson is a must do for people living in or visiting Tucson, AZ. Throughout the month of October, they host an event called Nightfall. This year’s event is from September 29th – October 31st and the entire town becomes a very scary destination. I was lucky enough to attend this year’s event with a very fun group of friends. We made sure to see and do everything to make sure I had all the info to pass onto you! 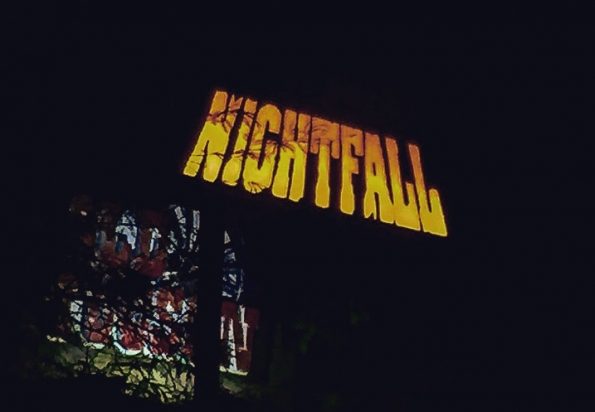 Getting There and Pricing

I personally love the drive over to Old Tucson. Wherever you are, just head west and follow the signs.. Along the way there are plenty of scenic pull offs, which are perfect if you want to take a nice picture of the sunset with a wonderful desert background. The road is a little bit scary for some people to drive, as it is a windy two way road, but just take your time and you will be fine!

The pricing is pretty reasonable for everything you get when you visit Nightfall. Parking is free, and admission is as follows:

There are discounts if you go in groups of 10 or more people. Admission prices cover the cost of most everything at Nightfall, except for food, drinks, and some attractions. There are 5 attractions that are not included in admission, but I will talk about those a little later on. If you plan to eat while visiting the food prices range from $5.00 for nachos or other smaller options to $15.00 for a sandwich. Water was $3.00 for a bottle, and we had some really good kettle corn for $6.00/bag!

Nightfall had 4 live performances to enjoy throughout our night. As you walk in, there are gargoyles who are pretty mean as they insult people. Unfortunately they were not out when I went, so I don’t actually know what they say, but according to nightfallaz.com, they are not for the easily offended. Besides the gargoyles, there were 3 shows offered, and they each took about 20-30 minutes.

The first show we attended was The Necro Show. This was your typical show filled with satire and pop culture news. The show took place on DNN, The Dead News Network and had 2 hosts. This show is not appropriate for children, and it also is not for the easily offended, but it was pretty funny! The second show is called Last Dance of the Dead. To be honest, I was not a fan of this show. I really couldn’t follow the story line, or understand what the actors were talking about. I also felt like the show was more for showcasing the singing of the actors and not focused on a good Halloween story. I still think everyone should give it a chance, but if you don’t have time to see all 3 shows, this would be the one to skip.

The last show, Fertile Ground II – A New Harvest was great! The show runs at the very end of the night, so it will be the last thing you are able to do before leaving. I don’t want to give anything away, but the story is based on a group of campers who go missing, and when the detectives come out to investigate, nothing seems to go right for them. Do they make it out alive? Well, that is for me to know, and you to find out!

This is the main area when you are walking through Nightfall to get to the shows or other attractions. There are a lot of characters ready and waiting to scare you here. Make sure to keep an eye out for the man with the chainsaw – he will chase you!

This is a maze attraction that is set up like an actual bunker, but a lot scarier. When you enter the maze, your group goes by themselves, and you are given one strobe light stick per group. This makes it really hard to see in front of you making it easier to get scared! The detail in this maze is really well done. 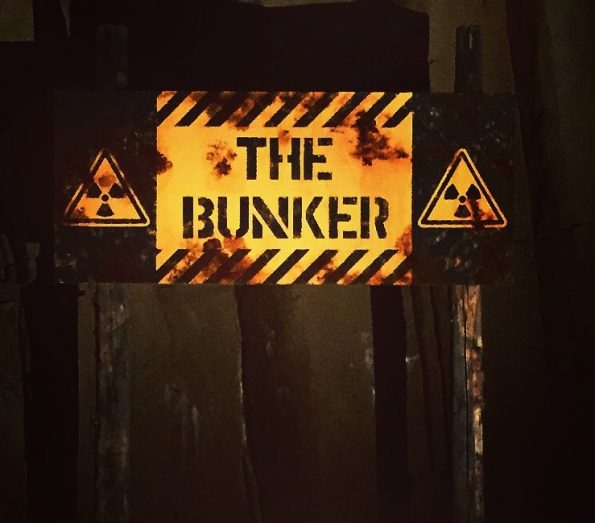 In this attraction, you are able to walk through tunnels that are rumored to be haunted with souls of cursed minors. This attraction used to be a ride, so there is a lot of use of animatronics throughout. They dress it up to be more Halloween like, and it was one of the better attractions of the night! I wanted to go in it more than once. The whole thing takes under 10 minutes to get through.

The cave was a very short 1 minute walk through attraction. The main thing there is an animatronic skeleton that you can interact with, and he will even tell you a joke or two. If children want to walk through, they must be accompanied by an adult.

This is a completely new section for Nightfall, and it includes the attractions Dead Horse Saloon and Rattlesnake Gulch. There is also a bar that has drinks of alcoholic nature, as well as soda and water. When I was there, no scare actors were walking around Doom Town. 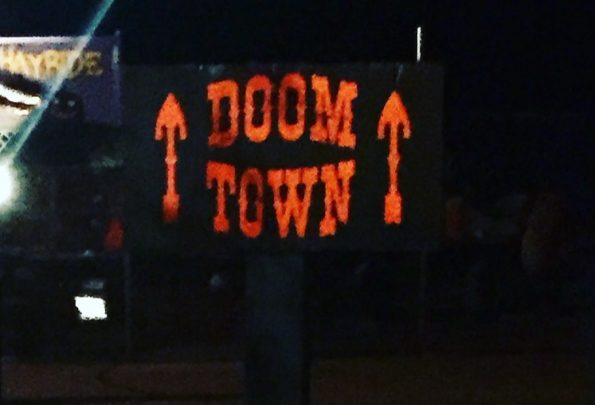 This is a maze that isn’t enclosed in a building, but instead outside in the desert. It is pretty dark out there, but Nightfall does a really great job of adding lights where they need to be so you don’t fall. The scare actors in Rattlesnake Gulch had some really amazing hiding spots, including one who got me really good that was hiding in a tree.

Dead Horse Saloon is a pretty quick walk through maze, my group was in and out within 5 minutes. There are no drinks or food allowed in the maze, so keep in mind that you have to put them onto a table that is right outside. There were also a lot of actors in this maze!

There are 5 attractions at Nightfall that cost an additional $5.00 per attraction. The attractions include Strange Family Circus, Twisted Circus Train, Haunted Hayride, Zombie Shoot, and a virtual reality experience called Thrill Quest Adventures. The only one that I did was the Twisted Circus Train, and it was well worth the $5.00 charge. You get on a train that takes you through the outskirts of Nightfall into the desert, and is approximately a 7 minute ride. There are a few clown dolls in the desert, but it would have been a lot scarier had there been actors scattered about! Once you got to the end of the train ride, you are able to walk through a clown maze. There were only clowns inside, and it was really scary, and colorful! The train ride was definitely worth the money in my opinion. 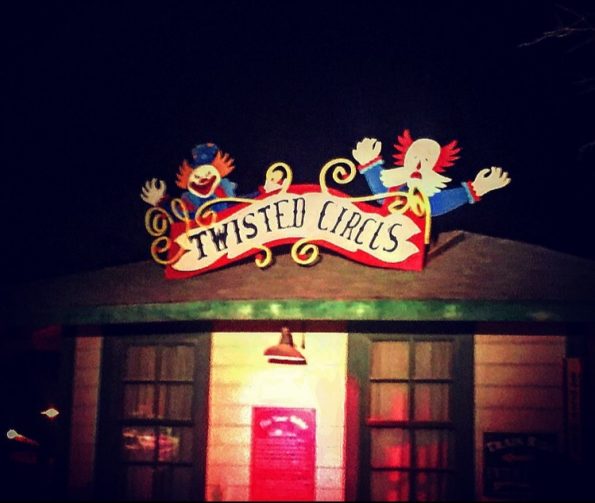 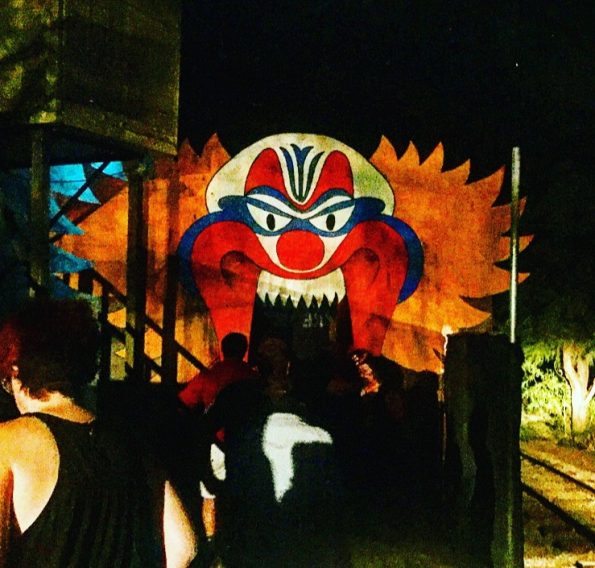 Besides the attractions that cost extra, Nightfall also offers a “Scare-Me-Not” wand. It costs $2.00, and is a really great option for children because if the light is on, the scare actors won’t come after you, but you can always turn it off if you would like for them to pay a little more attention to you. 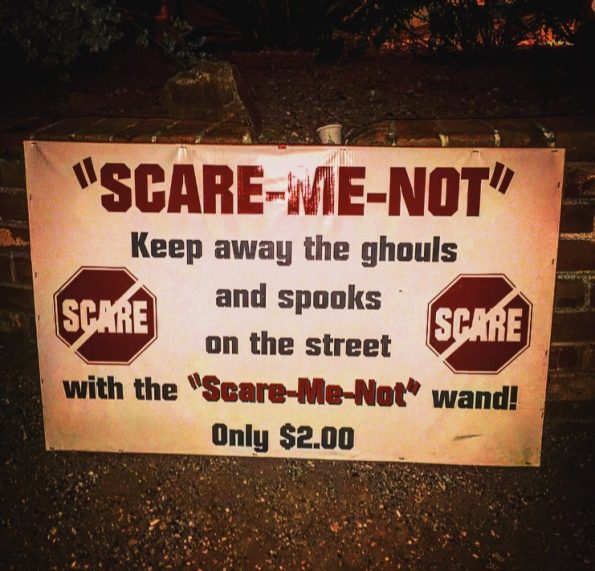 Old Tucson’s Nightfall is a really wonderful and fun October event to attend if you are in the Tucson area! There are good scares, good food, and good shows. I also really like that the mazes aren’t too close together because it gives you some time to recuperate and get a feel for Old Tucson. Besides Nightfall, Old Tucson is a fantastic place to go for the whole family.